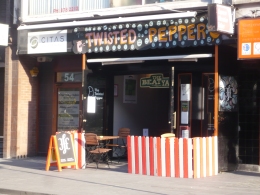 This basement home for the Seven Towers Open Mic in the Twisted Pepper Cafe seems just the thing. Only thing is: the acoustics are so good no mic is needed. So how can one have an open mic without… a mic…? Well, one can, and very well can one. OK, my incoherence aside, we had good night of readings and performances with Susan Walsh from Wyoming making her debut ‘Last Wednesday’ and Helen Dempsey with a rather grim offering about “Judgement Day’ (she said she was inspired by Declan McLoughlin [our genial MC] saying last time that the world would end on May 21… I heard him say it too but I haven’t been writing poetry about. Just buying up tinned food and praying…). Great to see Andre Kapoor back again with his off-by-heart lyrics (I hate him), Ross Hattaway very serious with pieces on war and its needless sacrifices and a newcomer Raphael (I’ve forgotent his second name) with writing about the

recent Japanese earthquake. This prompted me to read my ‘Kasoturi Jidai’ poem (from ‘And Suddenly the Sun Again’) which deals with the devastation suffered by Tokyo during World War II.  Alan Garvey also gave some poems and afterwards exchanged books with me and I have been reading his ‘Terror Haza’ collection (Lapwing 2009) since with great interest. Very accomplished, hard writing. Many other great contributions on the night and, as I have said before, if you are not coming to this event every month… there’s no hope for you.