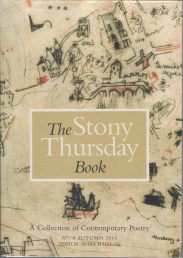 Very happy to appear in this year’s ‘Stony Thursday Book‘, the publication from the Cuisle  Limerick International Poetry Festival 2010 alongside so many (other) luminaries. Of course my eye goes first to people I know on the Dublin ‘circuit’, like Eileen Casey with a fine poem full of the hard, harsh imagery of Siberia (‘Woman wearing her home around her shoulders‘); and Orla Martin with “Regret’, a small poem that covers a lot of (emotional) ground; also I find Anamaria Crowe Serrano with a troubled poem ‘An Elephant’ which gets deep into the experience of grief and sorrow. No ‘Notes on the contributors’ in this edition so one cannot see behind the poems to get a glimpse of the authors, but lots and lots (142 poems!) of really good stuff and one would be really hard-pressed to chose the best half-dozen. But in that nefarious number I would certainly include Cillian Fahy’s ‘Footnotes’. It’s just the sort of lively, sardonic tilt at literary pretensions and posings that really appeals to me. It’s too clever by half, of course…. well, no: it’s too clever by at least three quarters– And that’s what I like most about it. Another poem I would like to include in the best half-dozen is my own ‘It’s Not the Wrinkles’ but then Cillian would have me in his sights for his next composition, so… perhaps not…

IT’S NOT THE WRINKLES

It’s not the wrinkles

or the loss of hair.

Or the stiffness in the joints–

It’s the traipsing up the stairs for something

and then coming down again

I can bear the loss of tooth,

of favourite writers, even close friends

this constantly repeating myself.

or even stiffness in the joints.

Did I tell you that these days

I can’t even remember the names

I suppose it’s all pre-packaged,

this sojourn on the earth’s crust,

and when you start outstaying

then all the extras start to be withdrawn. But

and… now what was this I was going to say …