I finally got my second collection out of my hair, first in Cassidy’s  of Westmoreland Street (launched by Karl Parkinson) and then  in Lucan Library (launched by Niamh Bagnell). And a big thank you to Seven Towers for publishing it. Seventysix poems. It’s been a long time since my first collection, ‘Dispatches & Recollections’ in 1998 and what kept me so long? I guess you musn’t be in the poetry-writing-publishing arena if you ask that question. If you are, you will know just how difficult it is to get your work in print. It’s not just because there are so many really good poets out there, which there are. Or because there are so few publishers– also true. It’s also such an effort to keep up the submissions and not be ground down by the rejections. And if anyone tells you that as time goes on one doesn’t mind rejections take it from me that that’s not true either! One just learns to absorb them and carry on regardless.

In fact I had a collection assembled about five years ago, and almost got to the publishing stage but (and I want to cut a long story short) things didn’t work out. I put a lot of work into preparing that collection and so I really could not psyche myself up to start submissions again until some time afterwards. Just about then I started going in to the Seven Towers open mic,

which hadn’t been going very long. The atmosphere was welcoming and inclusive and, eventually, I submitted my book. Seven Towers lays emphasis on open mic performance poetry as well as less ‘dramatic’ page poetry. (In fact all poetry is performance poetry: think of John Donne). Since my work ‘straddles’ both ‘camps’ (such terrible categorising!), or more precisely, since my poetry works equally well in both ‘formats’, my submission was accepted. Much of the poetry published by Seven Towers grows out of its open mic and listed reading venues. From the first I was delighted with this and still am. This is the way to write. Write, read out, amend, read out again, amend again… Well, this is the way I write so I guess it’s too much to say it’s the way. In the final analysis, there’s not just one way. However, as far as I am concerned, one has to get the stuff out in front of an audience to be sure if it works, both for the audience AND the poet. I don’t believe that poetry is a solitary meditative exercise.

The poems cover a long period of time. One of them, ‘When I am become Again’ was published in 1980, but most of them are of much more recent date. Many of them stem directly from my Seven Towers readings (such as ‘OMIGOD: Not Another Newgrange Poem!) and have all the hallmarks of ‘performance’. Others, somewhat ‘quieter’ (‘Times I Hear of Lives Lost’) date from a time previous to Seven Towers, but are still indebted to that open mic for a little ‘fine-tuning’ here and there. Still others were ‘forged’ at Gerry McNamara’s ‘Write & Recite’ open mics and others at Delta O’Hara’s ‘SpyBar’ sessions. As you can see, the book has a rather ‘mongrel’ pedigree. And I’m proud of that.

I have been using the name ‘Seven Towers’ a lot in the above meanderings, but it all really comes down to individuals in the end and I must say particular thanks to Sarah Lundberg, Oran Ryan, and Ross Hattaway for their encouragement over the years. I should also mention Steve Conway, but I won’t because he is of a shy and retiring disposition and wouldn’t like to be singled out.And I could not possibly list all the other writers who have helped me in the 7T open mics. Everyone I heard showed me something I could use and I was not ashamed to steal it– like all true writers. 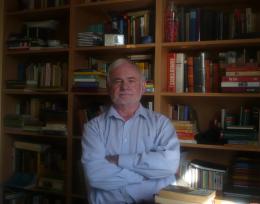